A reed switch consists of two or three springy metal reeds having plated, long-life contacts at the tips and encapsulated in a sealed glass tube.  The two-reed type has normally open (NO) contacts which close when operated, and the three-reed type is a changeover, i.e. it has a pair of normally open (NO) and a pair of normally closed (NC) contacts.  When the switch is operated, both these pairs change to the opposite state.  Both types are shown in figure 1.

Reed switches are actuated by the field from an external permanent magnet or electromagnet placed in close proximity.  This field causes the reeds to become magnetic, the ends are attracted and the contacts either open or close. Removal of the magnetic field allows the springy reeds to restore the contacts to their original state.

A couple of important points arise here.  First, the strength of a magnetic field decreases very rapidly at quite a short distance away from the magnet. In fact, at twice the distance there is only one quarter of the field strength.  This means that the operating magnet must pass very close (1cm or less - Meccano tolerances permit small clearances to be achieved) to the reed switch otherwise the field strength will be insufficient.

The second point is that reed switches have only a momentary action - their contacts revert back to their original state as soon as the magnetic field diminishes.  So, if you want a circuit triggered by a reed switch to remain on (or off), it will be necessary to use a latching relay circuit.

Advantages of reed switches to the Meccano modeller are their small size, which makes them easy to mount and unobtrusive, and the fact that the operating force required to operate the switch is very small, thus doing away with cumbersome cams or cranks.  Reed switches, and suitable magnets, are also cheap and easily obtainable.

It should, however, be pointed out that reed switches do have a few disadvantages - nothing is ever perfect!

First, the contacts and reeds are fairly small and delicate, so they won't handle large voltages or currents which cause the reeds to spark when switched.  Heavy currents also overheat the reeds causing them to lose their springiness.  If the reed contacts do become welded together (due to trying to switch a high current) you can often free them by sharply tapping the reed switch against a table - but not too hard or the glass will break!  It is always worth trying - you have nothing to lose because welded contacts make the switch useless.

Component manufacturers give typical voltage and current ratings for the switches that they supply.  A power rating, measured in Watts (W), simply means multiplying current and voltage, but remember not to exceed the current rating - e.g., 10V at 1A = 10W, but 1V at 10A also equals 10W, but in this case the current would be too high.  If you are switching large currents, it will be necessary to use a relay circuit with the reed switch operating the relay coil only.

Second, since reed switches are rather fragile, particularly if you are soldering onto the thick lead-out wires, it's easy to break the glass and seals.  If you need to bend the lead-out wires, make sure that you grip them securely with pliers between the glass seal and the bend point, as shown in the top of figure 2. 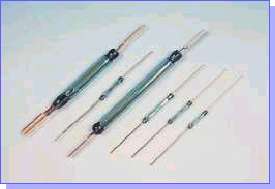 A selection of reed switches